VIEW BY APPOINTMENT ONLY Speak to us about Outram / Pearl Hill area

Named after the bullock carts that used to supply fresh water to its resident, Chinatown is an ethnic neighborhood featuring mainly Chinese cultures. Many famous places of worship are also within the vicinity, including the Sri Mariammam Temple, Masjid Jamae and Buddha Tooth Relic Temple. Nearby, a plethora of medical facilities can be enjoyed via Outram Park train station, situated right outside Singapore General Hospital. Within the district are also government agencies like the Health Promotion Board, Health Sciences Authority and Central Narcotics Bureau. Besides the Pricewaterhouse Coopers Building at Telok Ayer train station, Prudential Assurance Company, Tokio Marine Asia and Urban Redevelopment Authority are hold offices in this neighborhood. Other office towers include Hong Leong Building and Capital Square. For some peach and tranquility, new residents at Dorsett Residences, Pinnacle @ Duxton and Spottiswoode Residences can visit the Pearl’s Hill City Park tucked away in the corner behind the Outram Park train station.

Chinatown earned its Chinese name, Niu Che Shui (牛车水) or Bullock-Cart-Water (literal translation), during colonial times, when fresh water had to be carted there by bullock-drawn carts to meet the needs of the large numbers of Chinese immigrants who had made it their home. Since then, Chinatown has grown into a site of rich culture not just that of the Chinese; it is widely regarded as Singapore’s largest Historic District. In 1989, the Urban Redevelopment Board designated Chinatown’s five districts as conservation areas, and with good reason: it is a veritable treasure trove of Singaporean history and culture. Present-day Chinatown is an eclectic mix of old and new; weathered shophouses stand side-by-side with shining glass-and-chrome commercial buildings, and one could easily feel as if they were transported back to the early 1900s while walking down the alley – if not for the fact that they can access free Wifi throughout the whole area.

Something central to Singaporean identity – racial and religious tolerance – is physically embodied at South Bridge Road, where Sri Mariammam Temple, Masjid Jamae and Buddha Tooth Relic Temple, all famous temples of different religions, stand side by side, and have done so for decades – some temples were even built in the mid-1800s. Since these temples are open to the public, they are a popular tourist destination, but they are certainly not the only tourist hotspot in Chinatown. The Chinatown Visitors’ Centre has various guided tours that vary in route, target audience and price, with some of them being free. This is a great opportunity for locals and foreigners alike to learn more about Singapore’s culture and history. Chinatown is also one of the main celebration sites of many festivals throughout the year – most notably, the Lunar New Year Festival, which features Lion Dances, fascinating performances, and unique delicacies.

Officially opened in 2013, Library@Chinatown is the first themed library on Chinese arts and culture which is fully supported by philanthropic funds. With sponsorship of CP1 Pte Ltd and Kwan Im Thong Hood Cho Temple, the library’s collection is regularly refreshed with new books and audio-visual materials covering a diverse spread of approximately 90 cultural, heritage, and literary programmes. This library in Chinatown carries a thematic collection of titles on calligraphy, literature, music, painting, traditions, customs and more. There is also a small selection of materials in commonly spoken Chinese dialects such as Hokkien, Teochew, and Cantonese. Furthermore, visitors can also read local and foreign electronic newspapers on large digital screens in the library. With a total floor area of 1,000 square metres, Library@Chinatown is also NLB’s first volunteer-run library where there is no customer service counter. Volunteers move around the library wearing a special volunteer t-shirt for easy identification.

In view of Covid-19 restriction introduced by the authorities,  all viewing in The Ladmark sales gallery is strictly by appointment* only. All registered visitors will need to use SafeEntry. (*All visitors / walk-in without appointment will be rejected. Strictly no appointment make on site, all appointments must be registered and arrange in advance for crowd control measure.)

* Progress of construction stages stated here is indicative only and is given based on estimate and information available. T.O.P date may vary over time depending on individual site conditions and situations. Information accurate as of 22 August 2021.

The progressive payment scheme is for properties that are in the process of being built. This scheme refers to payment by installments, with each payment made when a specific milestone of the development is reached

(within 08 weeks from issue of OTP)

(estimated 06 to 09 months from launch date)

*% refer to percentage of purchase price

👉 Click here to get our latest available units in tower view at The Landmark.

👉 Click here to get our 🌐 Official Landmark e-brochure with all units type layout and configuration.

👉 Click here to get our latest update of The Landmark available units and price with direct discount from developer – Landmark JV.

Get Pre-Approved loan before your purchase

It comprises of two components:

📢 Housing Calculator has been updated according to new cooling measures which came in effect on 16th December 2021.

Generated from Property Guru report, there are most transactions in the $1 million to $1.5 million price range. Comparatively, there is a slight dip in properties priced under $1 million and an increase in properties priced between $1.5 million to $2 million. This may be due to a slowdown in investments in shoebox units, and an emerging preference for more spacious homes among owner-occupiers.

The Landmark have most of its one & two bedroom units price in the sweet spot of $1mil – $1.5mil range whereas its three bedroom units are in slight above $2mil range which can be shown in the report that this segment have been on the rising trend too.

The price point of The Landmark on average $2,000 PSF have especially appealing to home buyers who are seeking value buy in city area. Do check with our appointed agents on The Landmark units.

Towering over the city centre, The Landmark is picturesquely bounded by the lush 🌲 Pearl’s Hill City Park (more information about it ) and bustling 🚤 Singapore river . At the heart of the city-state’s most dynamic nexus for business, culture and heritage, recreation as well as the arts, The Landmark is truly a landmark among landmarks. 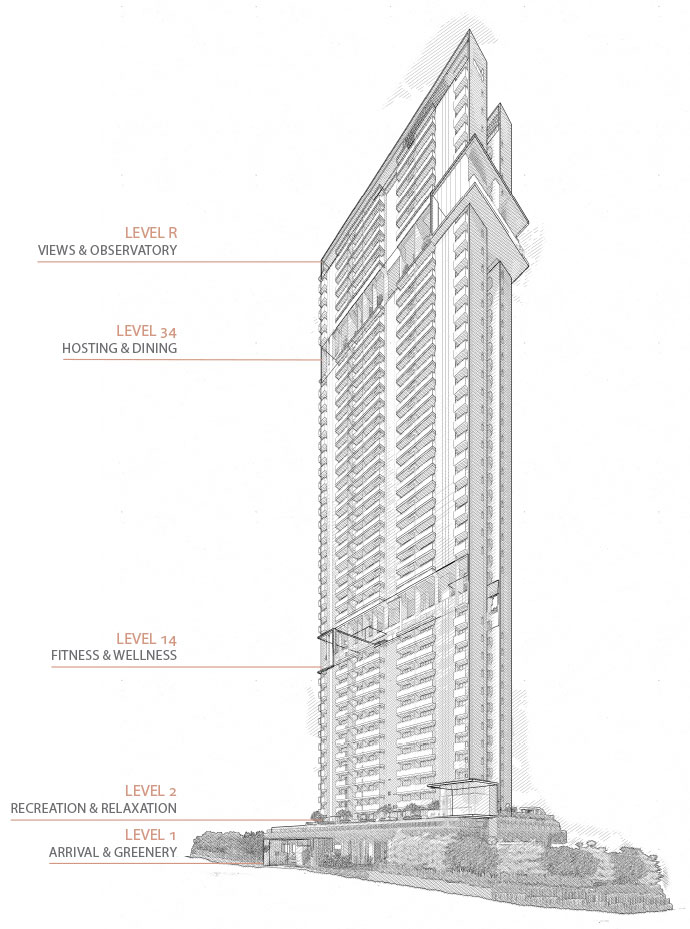 Perched on the crest of Pearl’s Hill City Park, The Landmark rises above Chin Swee Road in its metallic architectural splendour. Looming over the city centre, the 39-storey The Landmark comprises 396 units of 1, 2 and 3 bedroom living spaces and 5 decks of lifestyle facilities at various heights.

A single-tower, 39-storey luxury residential development with 5 decks of lifestyle facilities, perched atop a hill for a 360-degree panoramic view of the city, river and park. (📽video of the view )

(No. of units sold on monthly basis)

View The Landmark past transactions

*Find out the cost of breakeven price

The Landmark is one of most undervalued new development in city fringe right now. It is often overlooked due to its sleepy neighborhood and old HDB estate right across it. Having to say that, its outstanding location attribute cannot be ignore. Right smack in front of Pearl Hill park and just 8 mins walk to Chinatown MRT, the Landmark have offer unblock panoramic view which is very hard to come by in city area.

However, recent surge in property new sales have propel the property price index surpassed its previous peak in 2013 as shown below:

Reference: data.gov.sg
(Data.gov.sg was first launched in 2011 as the government’s one-stop portal to its publicly-available datasets from 70 public agencies. To date, more than 100 apps have been created using the government’s open data. This website is an initiative by the Ministry of Finance and is managed by the Government Technology Agency of Singapore.)

The average selling price $2,100 to $2,400 PSF, the Landmark have positioned itself as one of most valuable developments in city area as some new developments in OCR region have already achieved $2,000 PSF benchmark. Interestingly, most new developments in District 03 are 99 years leasehold tenure. However, the geographic location of The Landmark make its edge over its competitors in same district.

It is located not only close to CBD area, right next to a huge public park and lot of amenities nearby including hospital. This pose a great catchment of tenants should you consider for investment purpose. The selling price is also tandem with resales past transaction as shown below:

From data.gov.sg as shown below, our govt sales land is at all time low right now.

This paint a picture of a bullish market, as the Singapore property market continues to defy the economic recession that is raging on where current low supply and rising price index.

Reference: data.gov.sg
(Data.gov.sg was first launched in 2011 as the government’s one-stop portal to its publicly-available datasets from 70 public agencies. To date, more than 100 apps have been created using the government’s open data. This website is an initiative by the Ministry of Finance and is managed by the Government Technology Agency of Singapore.)

With projection economic recovery and gradually lifting of travel restrictions, it just matter of time where RCR prices will catch up. Recent recording breaking deals done at CCR are suggesting foreigners are highly confident of local market and making a comeback.

, aim to provide most comprehensive knowledge real-time statistics & price trend on The Landmark. Through various financial methods, we have successfully assisted home owners to purchase property w/o incur ABSD. For exclusive viewing of The Landmark, contact us at 6639 0909 or register an appointment.

How we can assist you in upgrading your current property?

How we can assist you in decoupling from existing property?

How you can purchase property under the trustee act?

What are estimated maintenance fees?

Is there bicycle bay in The Landmark?

There are 60 bicycle lots provided

Do every unit provided with refuse chute?

There will be refuse hopper provided at each tower common lobby.

All units are provided with induction cooker hob.

What is the ceiling height?

Ceiling height for living; dining; balcony and all bedrooms is 2.9m whereas bathrooms; kitchen; Hallway is 2.4m

📢If I am Singaporean or PR, what is the stamp duty payable?

There are two types of duties payable on the purchase, acquisition of residential properties in Singapore:

BSD is rounded down to the nearest dollar, subject to a minimum duty of $1.

ABSD Rates on the higher of the purchase price or market value
ABSD is to be rounded down to the nearest dollar, subject to a minimum duty of $1.

aim to provide best portal to start your real estate search whether you are an investor, buying for own use. In PropertyShape websites, you can find real-time detailed information about each development, including price trend , balance units and mortgage advisory. We bring you the most comprehensive search in new launches by using holistic approach. Users should exercise of their own skill and judgment in making any investment or other decision. Any and all use of this information is solely at your own risk and without any recourse whatsoever to PropertyShape. We at PropertyShape makes reasonable effort to use reliable and comprehensive information to present to our viewers as accurate as possible.

If you need additional help in your housing hunt, you can also consult our PropertyShape members by “book for appointment”